This month I was featured in a WEDPIX article produced by WPJA (Wedding Photojournalist Association).  The feature focused on how to avoid trendy image manipulation that dates images and albums.

We’ve all seen them: vignettes and faux hand-tints; cross-processed images that overwhelm the senses with an unreal look; a heavy-handed use of flairs, starbursts and diffusion effects; cheesy frames. They cry for attention, hijacking the image in the photographic equivalent of a velvet Elvis wall hanging.

Where is the value, the poignancy, and the essence in these photos?

Today’s digital post-processing tools can be a force for good in the right hands, but can create visual mayhem when used without the proper judgment or in lieu of an essentially good image to start with.

Wedding photojournalism is all about the image and how it captures the moment and emotions. Any manipulation in post-production should be undertaken very carefully, beyond the temptation to incorporate trendy effects at the expense of the visual and documentary essence that make an image great in the first place.

“It is disconcerting to see mediocre wedding photography made to appear ‘fantastic’ as a result of drastic image manipulation,” says San Francisco-based WPJA member Catherine Hall. “Ten years down the road when the novelty of the current special effects fade, the images will lose their impact and become passé.”

A QUESTION OF RESPONSIBILITY

Wedding photojournalists have an obligation to help clients understand what is good and what is going to last. Certain effects are going to impress some people, especially a bride and groom who may not be trained in photography. As an accomplished professional, you have a responsibility to give them something that will resonate years from now with true quality.

Hall points out that couples are spending thousands of dollars on albums that are intended to last a lifetime, and sadly, some of the results are very gimmicky. “Many photographers abuse special effects such as image tilts, altered edges, and opacity fades. There is a time and a place for such effects, but one has to be careful not to overuse trendy techniques that will date the album. The most exquisite albums I have seen and produced are very simple and focus on the images.”

“Theoretically, I could probably give my clients an album that is over-designed and full of special effects,” she explains, “and they would probably like it because they have faith in me and at the time it looks fantastic. But the scary thing is what happens in five or ten years, when the novelty of overworked images is a thing of the past? We have a social responsibility to keep away from trendy effects so that the brides aren’t just satisfied when they’re writing the checks, but satisfied for the rest of their lives.”

Trends in image manipulation are not unlike trends with fashion or anything else— they’re always going to shift and change. It’s therefore much better just to keep your photos simple, elegant and about the imagery itself.

“There are always looks that are in vogue, whether cross-processing or something else,” notes Pulitzer

Prize winning photojournalist Edward Keating, who worked for The New York Times for 11 years. “I just shoot as if I were shooting for a newspaper. In other words ‘this is what I see.’ I don’t use star filters or add anything to the picture. I just try to get it the way it actually looks.”

Keating’s approach to wedding photojournalism is to create pictures just as he would for a newspaper or magazine, trying to stick to the way things really appear with an objective eye. “[Creatively], everyone can do whatever they want,” he says. “On the other hand, if you’re advertising yourself as a journalistic wedding photographer, then those kinds of special effects are kind of off limits, and you need to adhere to journalistic standards and styles. The image itself should be pretty much unadulterated and un-doctored, beyond dodging and burning and cropping. Much beyond that, and you’re skating on thin ice.” 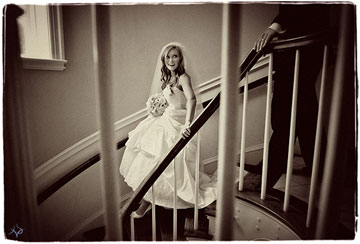 Of course, older photos are always going to look dated in some respect, and that’s okay. After all, fashions and hair styles change. “If you freeze a moment in time, then that moment 40 years later should look old and dated, because it is!” says Keating.

“But there are always trends and fashions in the way people photograph too,” he notes. “Like in 1967 the guy was using a fisheye lens and later people were wondering ‘what the hell was he thinking’?”

“You have to have a great image, and the books we are trying to produce are timeless, period,” states award-winning WPJA member and WPJA Artistic Guild judge Joseph Stefanchik, who works from his studio in Texas, and does some degree of manipulation on all of his photos. “You’ll know the time period in which the wedding took place based on how it looks, how the hair was, the clothes they wore. But they’re great pictures regardless.”

Hall maintains that the proper focus—what makes a photograph great goes back to the basics of photography: there should be emotion in the imagery, the light, the composition and the background. Then, the essence of what makes the photo great is already there.

“I’ve actually seen people ruin their photographs by over-manipulating imagery,” she says. “I was watching Top Chef yesterday. One of the chefs got kicked off the show, because he used a plethora of overpowering ingredients in a salmon dish. Unfortunately, the competing flavors masked the flavor of the fish. It’s similar to photography: If you have a great photograph as your main ingredient, you can add subtle effects to support it, but you always want to avoid overpowering the core impact of the image.”

She notes that it’s more acceptable to get trendy with manipulation when you’re doing advertising or commercial work, because the photos will be obsolete in five years anyway. However, with weddings you need to be particularly careful, because the photographs serve your clients as the only visual record of their wedding day.

Keating believes that dodging and burning, shooting without filters, and cropping are all fine, noting that The New York Times photographers are allowed only to do basic dodging and burning and color adjustments, as well as additional basic manipulations to reflect the objective photograph of an event or a person.

“With all of the image manipulation tools today, people are getting very trigger-happy in terms of overworking their images and overdoing things for special effects,” adds Stefanchik. “Anytime you see what’s been done to the picture before you see the content, that’s when you’ve gone too far. I’m a huge fan of bumping saturation and contrast, but like anything, it’s got to be done in moderation. We very rarely do any kind of manipulation that drastically changes what we remember seeing, and it’s very rare for us to do any kind of cross-processing. If it’s sand, it should look like sand.”

“That said, we’re always looking for a better way to do things; always reading somebody’s book on Lightroom or someone’s new book on mask layers, which is probably the best way to use Photoshop.”

Hall notes that while she does use filters, such as Nik Color Efex, to pump up the contrast and saturation, she ultimately produces imagery very close to the bride and groom’s memory of their wedding day. “When they see everything, they know it looks amazing, but it’s the image that they’re seeing, and everything else is supporting that image.”

The proliferation of the third-party market in Photoshop filters and actions could be cited as watering down the overall quality of the community of professional photographers, wedding photojournalists included. Some contend that this development has created a class of relatively inexperienced and incompetent shooters who can pick up jobs on the basis of others’ talents.

Stefanchik and Hall aren’t particularly worried about this. “Everybody’s a [wedding] photographer these days, so you have to be one step above with everything,” says Stefanchik. “Clients will look everywhere, and every type of approach is out there, so you have to separate yourself.”

“You can either let this drag you down, or you can take a positive approach, produce extraordinary work that doesn’t rely on overuse of filters, and differentiate yourself from the crowd,” Hall states. “That in itself distinguishes my studio from our competition. All the overworked imagery in the industry actually makes my work look better.”

Can you stand by your wedding album five or seven years later? That’s a short period of time, and Hall believes that most people wouldn’t be able to say that right now. “It’s almost like our parents’ albums, which are straightforward photos and design, are superior than what’s currently being produced. Some people may think they’re ‘boring,’ but at least they’re still about the photographs.”

She notes that not using effects actually helps her with getting clientele. “I have clients who give me an extraordinary amount of freedom to create beautiful things. So, your clientele is actually going to be determined by the kind of work you’re putting out there. The client that I’m going to get-art directors and the like-has got me better weddings.”

And that’s a win-win situation for the photographer, the client, and for posterity.

—by Michael Roney for the Wedding Photojournalism Association