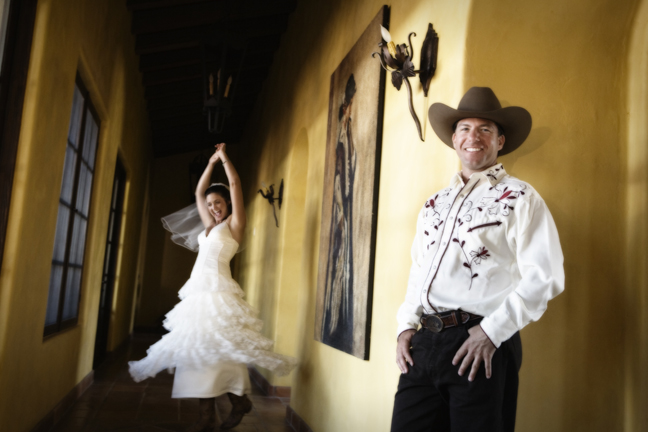 Heather Wall and Andy Katsev met in San Luis Obispo while she was attending Cal Poly, and he was working as a realtor. The perfect pair it was, one woman’s search for housing for her final year at college, and another’s search for the perfect tenant to fill his listing. After she moved into the neighborhood, where the couple still resides today, they crossed paths many times.  One day when Andy was strategically walking the dog passed her house, Heather made the first move and invited Andy over for salmon fish tacos.  Andy, who was raised in the Midwest, never says no to home cooking and couldn’t resist the offer.  From that evening on the couple was inseparable. After courting for six months, Andy surprised Heather and asked her to be his wife, on Valentine’s Day in romantic Cambria.

The wedding festivities were designed around the location, leaving no doubt that it had to take place at Hollister ranch, where the brides parents had just completed building their Mexican Hacienda style home, on100 acres of pristine Santa Barbara property. The event was so extraordinary because it not only celebrated love but also the, easier said than done, completion of Heather’s parents dream home. When it came time to planning, the natural beauty of this outdoor setting was enough on its own. With that in mind, the couple planned to a non-traditional wedding that took advantage of such an incredibly unique venue. They wanted their wedding day simply to be a festive party, where everyone would feel comfortable and get the most out of the amazing setting.

Heather’s personal style set the theme by wearing cowboy boots, as did the rest of the wedding party and most of the guests. At four o’clock in the afternoon the guest lounged on hay bails, and a handsome nine piece mariachi band played “El Niño Perdido” as the unrehearsed father walked his daughter down the isle. At this point the event came alive as guest whistled and screamed with joy, the groom and groomsmen removed their cowboy hats and bowed to the bride while the bridesmaids simultaneously curtsied. The couple chose to be married by a witty close friend that illustrated to guests the humor they both share.

The vibrant colored flowers and bright Mexican serapes lied across the tables in an enclosed courtyard for the reception. The wedding party entered the courtyard reception through an arched door with a bell over it. When it was time for the bride and groom to enter, Heather’s brother, along with a few delighted children, rang the bell several times by pulling on a long rope.

A priority of both families has always been food, so the decision to have two menus instead of one just seemed to fit. They opted for the California Simpatico menu and instead of the traditional cutting of the cake; the couple opted for an entire desert table filled with a dozen decadent deserts. In order to incorporate their family traditions, Heather asked her mother and Andy’s mother to bake their famous family recipes, carrot cake and strawberry shortcake.

A personal touch added by Heather and Andy, was to toast their 150 friends and family by including everyone in a sing-a -long. Lyrics to the song “What a wonderful world” were handed out to guests and the DJ made an announcement for everyone to start singing. Full of life, it was a truly genuine moment as everyone circulated amongst the energetic courtyard toasting each other and singing.

For their first dance the couple chose John Legend’s “Each day gets better”, a huge reflection of their shared outlook for the future. Subsequently, the father of the bride surprised her with their dance to Heartland’s “I loved her first”, which even brought tears to the eyes of some men! The wedding party was in charge of getting the terra cotta dance floor going, as they all got up and did the Texas two-step and electric slide while asking guest to join as they taught the steps.

Although the wedding site was on a working cattle ranch in a remote location, it became the most magical place dancing under the stars with friends and family. The secluded nature of the event made this wedding stand apart from any other.

Florist: Kelly Donlon at Blooms 4 You